No more western Buddhists, please—
I’ve had it up to here.
your grimly earnest souls aren’t saved;
your doctrines: very queer.

That lotus incense makes me sick.
It mingles with the fumes
of Subarus and passing schemes
in tofu-scented rooms.

Come off it, all you dilettantes;
your chanting is off-key.
The Zen is Sham; and God will damn
your choice to simply BE.

The books you offer all are full
of theravada shambala.
The Dalai WHAT? You babble on . . .
Ascetic sands you’re building on.

A bourgeois dalliance at best 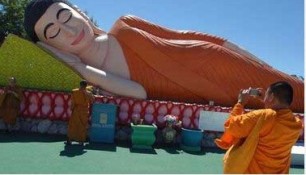 this turning toward the Mystic East.
Those jasmine smells, and gongs, and bells,
proclaim a saffron beast.

By Trungpa Rin-Po’s holy yak—
you’ve swallowed sinker, line and hook.
(Along with way too much green tea
and words from some Buddhist book.)

Celebrities that flap about

this form of Dhammapada-Lite
are mere proverbial flitting moths
and dwell in irrelevant night.

Your shaven sensei’s DVDs,
the Pali scarf, the trademark beads
should be compared to junk-food sweets:
what bald hypocrisy it feeds.

Contemplatives in SUVs
(like boiled carp in lacquered bowls)
are pseudo-karma-yankee-sake
poured into empty souls.

So trade your cushions for some Truth. 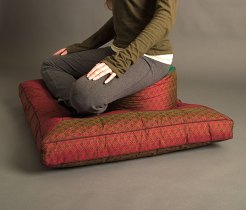 Unlock your legs. Uncross your mind.
Return to words that can make men see
—or meditate yourselves blind.

Before this cultural rot began,
before your symptoms were full-blown,
our ancestors did cultivate
the Gospel’s seed, once sown . . .