Santa Claus: a fat excuse foisted upon children by people who have aligned themselves with a culture of mindless consumerism; the last bloated burp of a shopaholic glutton who began overindulging on Halloween, through so-called Thanksgiving and right into the tinseled, beribboned present. 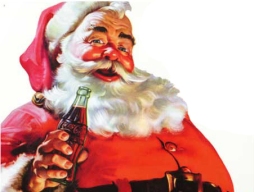 Santa is a tacky old man of dubious origins and intentions.

I used to teach 7th graders. I was surprised at how upset many of them were when told about the formulation of Santa Claus and the accompanying hype of Xmas in the U.S.A.
These were spoiled darlings from Suburbia – they were  peeved that anyone would dare inform them of any reality beyond their distracted lives of plenty.  I felt like sending them to Southern Sudan or North Korea to think about it for a while. 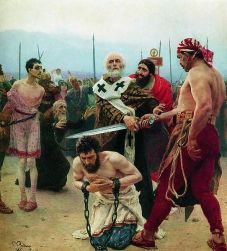 The role of the Coca Cola corporation in consolidating the image of  St. Nicholas (Sinterklaas)  more than a century after his makeover in the 1823 poem “A Visit from St. Nick” by a Columbia professor of  ancient literature is well-documented. But behind these recent pop-culture ploys looms the figure of an old  bishop in a conical hat (not worn in the magnificent painting by Russian Ilya Repin at left) who was known for his acts of faith and for helping the poor of his native Mysia in Asia Minor during the 4th century.