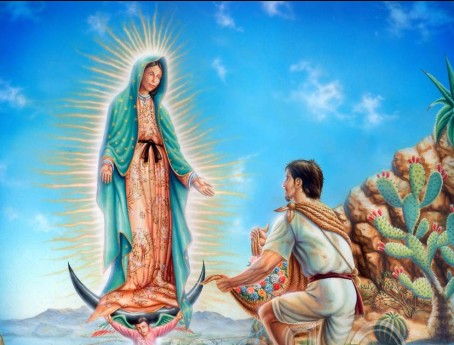 Irony of ironies: the so-called Virgencita of Coatl-Ilupe/Tonantzin presides over a nation of pregnant teenagers and tattooed criminal clowns in candy-flake hot-rods. She is well pleased, it would appear, with her beloved protectorate of narco-assassins and political corruption. She has, after all, clothed herself in the colors of the flag, this Aztec opportunist, this hack piece of Moorish religious art, this amateur Marian doodle on a piece of colonial burlap. She is tatooed on the skin of people who will kill you for dissing their chariots or for besmirching their dubious honor. She is hailed by illiterate peasants and cerebral postmodern feminists alike. She is adored by gangbangers and graffiti artists.

Hmmmm. Mammals that run in packs, fight over who is dominant, and mark out their territory by spraying – that would be…

los vatos locos? Sureños? MS 13?  Latin Kings?  Jackals?  NO –  devotees of the immaculate patroness ! When you really stare at the Virgin of G’s face long enough, she reveals what she truly is: a relic, a propaganda goldmine, the flowered skull of a Pre-Columbian death cult:
SANTA MUERTE !  This piece of priest-craft foisted on the Aztec nation is anything but what she is claimed to be: the Hebrew maid Miriam, merely human mother of the Messiah. She is an apparition of something else entirely –
something false, something that enslaves, something very much like Diana of Ephesus [Acts 19:23-41] – another famous idol and has-been…