The dawn is nigh at hand. The clouds
begin to lift above the grange.
Arise, O Phoebus, bless the crowds –
let poultry roam the range.

I’ll bind a broom of gathered hay
to sweep the hen-house free of hate.
Let roosters hail the crack of day
and chicks with cocks tempt fate.

A fractured self and a challenge hurled:
they left the shell – but found it rough
because our bigoted barnyard world
cannot get queer enough fast enough.

They flutter through the breeder’s farm
subverting gender’s useless role.
We feel their pain, and mean no harm –
yet question this progressive goal.

They cluck a brand-new barnyard song:
Gender Identity Obsolete!
(As long as they claim God hatched them wrong,
biology signals their defeat.)

While poultry scratches rhymes for “hen”
and chicks are combing crests for cocks
let’s ring the dinner bell and then
we’ll synchronize the global clocks.

Then dawn shall break o’er Russian plains
to liberate the Tartar races;
loose their limbs from Gender’s chains
to stride with polymorphous paces.

China too, and Southeast Asia
swift shall follow in their train
celebrating sex-aphasia
joining in the West’s refrain.

Hindu multitudes will rise
to vanquish gender, caste aside
and shake the slumber from their eyes
with metro-ambisexual pride.

Carib isles, with Latin kingdoms
From the tropics to the mountains
Shall announce they too are Wisdom’s,
drinking from de-gendered fountains.

Then shall our earth, in glad array
spade dirt upon Tradition’s tomb;
unshackled from that dark dismay
to grieve – but nevermore exhume.

Alas, the global dreams descend.
We’re back in the barnyard, gender-queer…
where hens have cocks and eggshells bend
transcending Nature’s reign of fear.

(Because I was almost one of them
I’ve earned the right to make fun of them.
Time alone will tell if the trend
remains coherent to the end.) 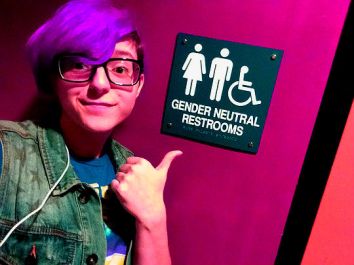