In the garden of earthly delights

A disturbing assortment of sights;

From sublime… to more ominous,

Lay of the Knaked Knight

Revealed beneath her seventh veil:
A poem on her ass in Braille.

My fingertips caressed that verse
And read her lyric universe.

An astral plane of swelling curves:
Her lyre well-strung to calm my nerves.

My lovely muse! All lettered charms
Grow warm in her angelic arms.

Her noble face, her tawny cheeks
Bestow the balm my spirit seeks.

Bright thoughts arise, and glowing, pass
Upon the volume of her ass. 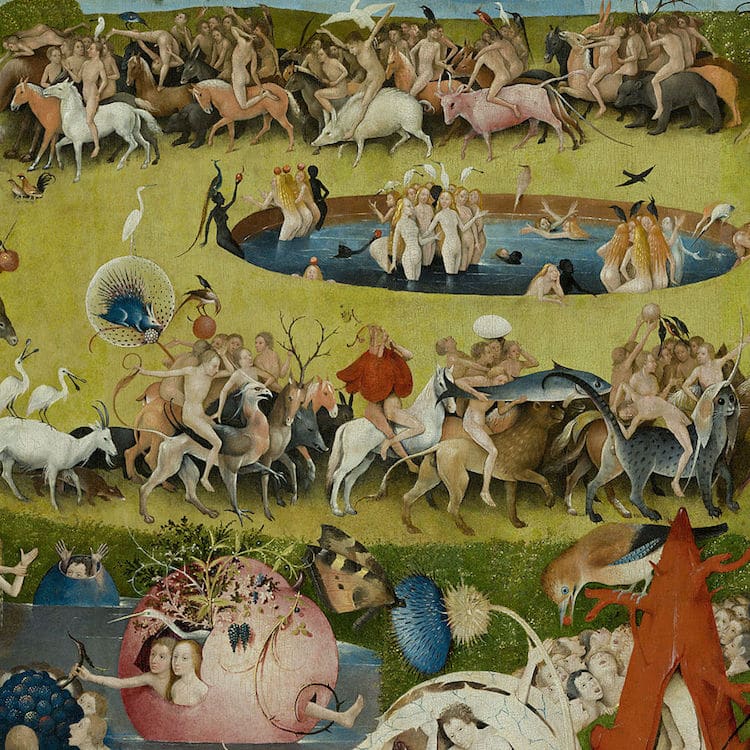 PROMPT #6: a poem from the point of view of a person from Bosch’s triptych The Garden of Earthly Delights

Who sing, off-key, of their own refusing.

On a quest for what is not,

Entranced with their own maudlin musing

In that zone where life gets buffered

As the pages load; confusing

Pain with what their souls have suffered:

Lyric bombs for your defusing.

write a self-portrait poem in which you make a specific action a metaphor for your life –
one that typically isn’t done all that often, or only in specific circumstances.
For example, bowling, or shopping for socks, or shoveling snow, or teaching a child to tie its shoes.

Huddled in your castles like Prospero’s doomed revelers, sighing in the springtime of contagion, you evade and avoid the obvious. But the Muse has entered, unseen, and stands among you in her mask of elegiac splendor. She smiles as you mock her presence. She laughs quietly to herself as her influence wafts upon the very air, inspiring and infecting all concerned. You try to protect yourselves from the lyric epidemic, nonetheless her viral poetic molecules go forth, regroup, mutate, and attach themselves to the souls of her detractors. Her spores hang upon the very droplets of the mist, a suspended Parnassian miasma. The first tremors of poetic sickness begin to shudder deep within and among the most reluctant revelers. They try to dispel their fears; they brag and congratulate themselves, chattering about the uselessness of poetry, listing all they ways in which they have successfully barricaded themselves from her pestilential presence. But the Muse has entered and none can ensure her departure. Poetry will have her way and resistance is futile. Some will survive, but others will meet her as their avenging angel of the plague, and neither Egyptian magic nor sanitizing legerdemain shall deter the blossoming vector of her influence. Fear, oh unpoetic readers, this sudden lyrical acceleration, this verdant celebration:

An Horatian Ode upon Cromwell’s Return from Ireland

The forward youth that would appear,
Must now forsake his Muses dear,
Nor in the shadows sing
His numbers languishing.

’Tis time to leave the books in dust,
And oil the unused armour’s rust,
Removing from the wall
The corslet of the hall.

So restless Cromwell could not cease
In the inglorious arts of peace,
But through adventurous war
Urgèd his active star:

And like the three-fork’d lightning, first
Breaking the clouds where it was nurst,
Did thorough his own side
His fiery way divide:

For ’tis all one to courage high,
The emulous, or enemy;
And with such, to enclose
Is more than to oppose;

Then burning through the air he went
And palaces and temples rent;
And Cæsar’s head at last
Did through his laurels blast.

’Tis madness to resist or blame
The face of angry heaven’s flame:
And if we would speak true,
Much to the Man is due

Who, from his private gardens, where
He lived reservèd and austere,
(As if his highest plot
To plant the bergamot),

Could by industrious valour climb
To ruin the great work of time,
And cast the Kingdoms old
Into another mould.

Though Justice against Fate complain,
And plead the ancient Rights in vain—
But those do hold or break
As men are strong or weak,

What field of all the civil war
Where his were not the deepest scar?
And Hampton shows what part
He had of wiser art,

Where, twining subtle fears with hope,
He wove a net of such a scope
That Charles himself might chase
To Carisbrook’s narrow case,

That thence the Royal actor borne
The tragic scaffold might adorn:
While round the armèd bands
Did clap their bloody hands.

He nothing common did or mean
Upon that memorable scene,
But with his keener eye
The axe’s edge did try;

Nor call’d the Gods, with vulgar spite,
To vindicate his helpless right
But bow’d his comely head
Down, as upon a bed.

—This was that memorable hour
Which first assured the forcèd power:
So when they did design
The Capitol’s first line,

A Bleeding Head, where they begun,
Did fright the architects to run;
And yet in that the State
Foresaw its happy fate!

And now the Irish are ashamed
To see themselves in one year tamed:
So much one man can do
That does both act and know.

They can affirm his praises best,
And have, though overcome, confest
How good he is, how just
And fit for highest trust;

Nor yet grown stiffer with command,
But still in the Republic’s hand—
How fit he is to sway
That can so well obey!

He to the Commons’ feet presents
A Kingdom for his first year’s rents,
And (what he may) forbears
His fame, to make it theirs:

And has his sword and spoils ungirt
To lay them at the Public’s skirt.
So when the falcon high
Falls heavy from the sky,

She, having kill’d, no more does search
But on the next green bough to perch,
Where, when he first does lure,
The falconer has her sure.

—What may not then our Isle presume
While victory his crest does plume?
What may not others fear
If thus he crowns each year?

As Cæsar he, ere long, to Gaul,
To Italy an Hannibal,
And to all States not free
Shall climacteric be.

The Pict no shelter now shall find
Within his parti-colour’d mind,
But from this valour sad,
Shrink underneath the plaid—

Happy, if in the tufted brake
The English hunter him mistake,
Nor lay his hounds in near
The Caledonian deer.

But Thou, the War’s and Fortune’s son,
March indefatigably on;
And for the last effect
Still keep the sword erect:

Besides the force it has to fright
The spirits of the shady night,
The same arts that did gain
A power, must it maintain.