Two years ago, at a Job Lots-type discount store, I found a trove of art postcards on sale. They were produced by  Pomegranate  in CA. I bought two unfolding pentych postcards by artists I did not recognize. That’s how I discovered Mati Klarwein and Cliff McReynolds.

One pentych postcard was the  Saint John Pentych by Mati Klarwein. I read a lot into this painting;   the  desolate mediterranean view from within a cave and the fair damsel with Greek written all over her chest bring to mind  Saint John on Patmos and the “woman clothed with the sun” of Revelation .   Did the artist intend this?

McReynolds output  is  far less, but I find it equally illuminating. I just learned that he did an album cover for Flora Purim. I can’t find all five frames of his pentych online, but here is a link to Now (available as a poster) and below you can see the central painting (Life): 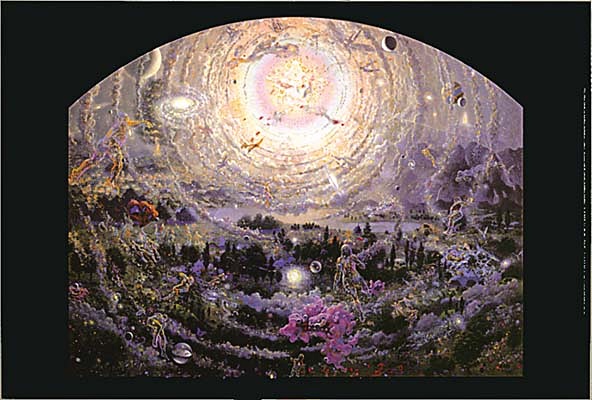 Klarwein is better-known since he established himself as an album-cover illustrator in the 60’s and 70’s.  You have probably seen his work on Santana and Miles Davis albums among others. 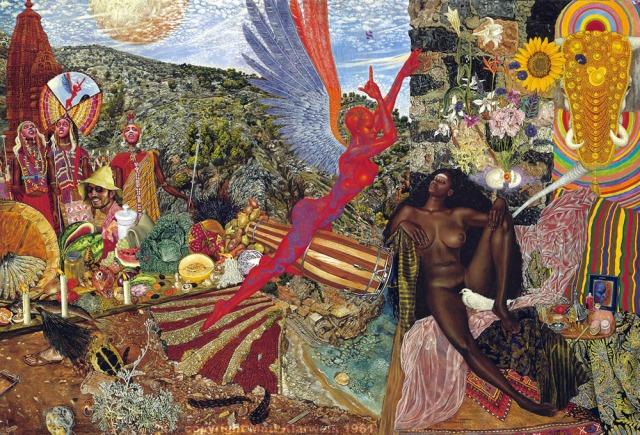 In this part of the Saint John Pentych below I found the perfect graphic
to match George Harrison’s epiphany at the end of  It’s All Too Much . 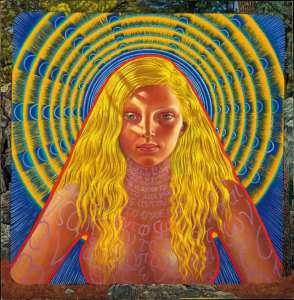 I won’t go on about these two – just look at the links and the artist’s sites.