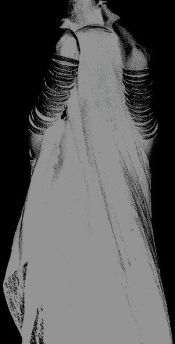 Oh Kushite muses, open wide my lips
Regardless whether blood or honey drips,
To speak against the backwardness of those
Who progress, light, and liberty oppose.
To clarify a theme of clannish wrong
While nomads move the camel-herds along.
Animal husbandry takes on new meaning:
Their brides sewn shut; their pasturelands are greening;
Sheba’s daughters cheated of their pleasure,
Despoiled through painful plunder of their treasure.

Filthy blade in hand, the crone bears witness.
The girl in terror, clueless, cut, then clitless.
As if this weren’t enough, infibulation
Ensures the bridegroom’s bloody domination.
The honeymoon brings every husband joy:
Reopening the wrapping on his toy.
Where knife or horse-whip place their gentle kiss,
there Kushite swains deliver nights of bliss.
And nine moons later, motherhood, grown mild,
is opened yet again by blade for child.

From Kush to Punt, on Afric’s burning horn,
Sadistic ways cause modern minds to mourn.
We wonder how this barbary was born . . .
Many Bantus, and Ishmaelites as well
consign their birth-machines to living hell.
Explain to me how Satan sold this rite
to those who dwell in bio-sexual night?
Veiled in flesh, her godhead cast aside
Subjected to some herdsman’s wounded pride . . .
Let Kush and Punt, their glory days recall;
Their daughters drink the wormwood and the gall.

Old scars, reopened, threaten to infect
What multi-culti feminists protect.
(But no one ought to talk about such things
because of all the prejudice it brings.)

I end my Abyssinian blog posts with a poem I wrote several years ago.
It may be indirectly inspired by memories of a lovely and kind-hearted Ethiopian university student who lived with my family when I was 10. She introduced us to berbere and doro wat, and set me up to appreciate gastronomy from Africa’s horn for a long time to come. She had a beautiful smile,  she had a Wilson Pickett record and she initiated me into the mysteries of pop music and the radio. Her name was Adeye. This was in the mid-70’s just before the Marxist coup which brought in Haile Mengistu Mariam. We lost touch with her long ago. The poem is also inspired by times I have been offered coffee among Ethiopian people, who have a beautiful ceremony involving frankincense when they partake.

One last Kushitic dream—be patient:  once I was at the Boston Museum of Fine Arts, in the Egyptian mummy room. I was chatting for a while with a beautiful Eritrean security guard among the crypts. Mysteriously, everyone cleared out and for a short while it was only the two of us, surrounded by opened sarcophagi in the dimly-lit room. For a moment I thought I was speaking with the eternal spirit of some Nubian princess who had just climbed out of one of them !

(Of course Psalm 68 in the King James Version also had something to do with my Ethiopic overload…) Now my poem:

I long to know that land in spirit
where the highlands meet the desert.
Where there’s faith and coffee served
with ceremony still observed.

The white-robed land, where priests intone
in levite ritual ‘round the ark.
A land in clouds of frankincense,
whose past is bitter, strong and dark.

I’ll enter where the rock is carved
in cruciform epiphany;
where Midian’s curtains hide the starved
whose hunger feeds conspiracy.

I’ll walk the wilds of Meroë
all ruined in the desert sands,

where beauty wails and ululates
as silver gleams on amber strands.

Her kings and peasants come to naught
when princes’ plots are overthrown.
Her blameless name was never bought;
her faith in Christ is scribed in stone.